How many lives do we have? As many as we want. I’ve had quite a few. I’ll take you through them quickly. With apologies to Joseph Campbell, my purpose is to show you, and myself, that it’s never too late to answer the call.

Twelve: I imagined myself free of a bully. Every day I dreamed of what it would be like to come and go as I pleased. To do the things I liked (that were, admittedly, geeky – reading encyclopedias and dictionaries and making up spelling bees for myself) without facing taunts and humiliation. Some nights I dreamed of the bully meeting a cruel and untimely death. Mostly I just wished she would leave Saint John and never return.

The wishing became planning – not her demise, but my freedom. In spite of my shyness I made friends with other girls my own age (the bully was three years older). I devised a route through the woods that circumvented the bully’s house – out of sight, out of mind. That was my plan. And it worked. When I got lonely and was tempted to go visit my bully I would think up fun things for the next time I’d see my friends.

I became my own hero. I came back from the threshold with a treasure – the realization that the bully was more timid, more afraid and more desperate than I was. We grew to become lifelong friends.

Seventeen: I went to Vancouver with a man who was eight years older, had been married, and fathered a child. I had dropped out of high school at 15, worked in restaurants and hitchhiked to exotic places like Montreal where I slept on a bench at the park across from the Queen Elizabeth Hotel; you could do that then. I still remember the mid-day scent of castaway food and cigarettes trampled into hot pavement, and the cold-concrete smell of evening.

Unlike Montreal, Vancouver was not a happy adventure. It was bit of a nightmare, actually. At first I worked for an insurance brokerage firm. Within six months we moved to the Newton, a small town that’s now in the city of Surrey. I sold jewelry at house parties (not bad for an introvert), waited tables at a local dining room and spent a lot of time at the library.

I didn’t so much plan my escape as envisioned it. I saw myself in a royal blue wool suit and a white blouse with a red, white and blue scarf. Sounds like an Air Canada stewardess outfit now, but then it was my salvation. Every time I wanted to give up, that blue-suited young woman strode confidently through my brain. I didn’t even have to summon her. She just showed up. She stayed with me until I boarded a plane (Air Canada!) and made my way back home. A new me.

Twenty-one: My lack of education started catching up to me. My brain wanted bigger challenges than office or retail work. I grew restless, bored and dissatisfied – the first stirrings of the hero’s call – but I had limited options without a high school diploma.

I was dating a local guy who was taking dentistry at Dalhousie University. He asked me to spend a weekend on campus with him. He was living in residence and wanted me to meet his friends. I had no frame of reference for how university students lived. I was completely out of my element. I didn’t understand what their parties were about and why they swarmed from room to room, consoling each other about break-ups and running out of make-up and what a disaster it was that their roommate puked on the duvet (what the hell was a duvet anyway?).

The next day he gave me bus fare and directions to the depot. He suggested maybe I should go back to school. Maybe even university. He deemed that I was smart enough, even though I had made some faux pas that putting me out the running as a girlfriend. 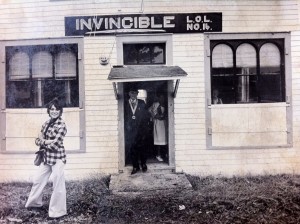 Thanks to him, I got to see what the inside of a university looked like. And I wanted to be there. (I never did get the residence thing – when I eventually did go to university I lived off-campus). I imagined myself studying law en route to Parliament. I had visited my brother in Ottawa and stood in the middle of the floor of the House of Commons. I imagined my inaugural speech I revelled in the applause. I bowed to my colleagues on each side of the floor. And went back to high school.Then UNB.

Thirty-something: This journey was planned. It didn’t begin with restlessness but a deep need. Not to be Prime Minister, which was my goal going in, but to be a mother. And it didn’t require reinvention so much as opening up. This transformation came through me from somewhere beyond me. It continues to be the greatest gift, the purest joy of my life.

Forties: No one plans to get divorced. It’s one journey we all hope to avoid. Most of don’t. For me, it was about finding truth. A way of getting back to myself. This is always one of the most difficult treks – our internal demons rival anything Luke Skywalker ever stumbled across.

I was the classic reluctant hero of my own story. I received the call many, many times but refused it. Eventually I found mentors and who helped me cross the threshold where I encountered tests, allies and enemies; endured the ordeal and took possession of my reward. I don’t know how much my journey benefitted the world; in fact, it caused a great deal of pain. But if I hadn’t answered that call, I’m not sure where I’d be right now.

Sixty: Ain’t that somethin’? Never thought I’d make it this far. But now that I have, I’ve set my sights on 90. And, yes, I’m feeling that call again. So many adventures out there – even more of them in here – the enticing landscape of the heart and mind. Resurrection at 60 is different from transformation at 30. But what we may lack in physical stamina – and time – we make up for with wisdom and patience.

I was reluctant to make this move – many false starts and retreats. But I’ve crossed the first threshold and entered the special world of my childhood. I’m certainly encountering tests (renovating a house, leaving the place I’ve lived the longest and being further away from dear friends and my children – I know they’re adults but it doesn’t matter, they’re still children even though they’re amazing men). I’ve made new friends – such lovely people in the Saint John area. The inmost cave looms and I’ll have to summon my courage to get through this one (JC doesn’t call it the Ordeal for nothing.) This is where I commit – or not – to becoming the writer I’ve dreamed of being since I was eight years old. I don’t know what that will look like, but I know it entails a showdown with the internal critic that tells me I have no business dreaming of greatness (my personal version of it). Which could turn to be something else entirely. As Martha Alderson, the plot whisperer, says of the hero, “…her ultimate transformation creates her anew with a different understanding of herself and her existence.” That’s where I’m headed.

I appreciate the support and encouragement of friends like you who read my blog. If something is calling you, pick up the phone. It may not be what you want hear – change is often messy, impractical and unsettling – but it will be a relief. Deep down we know when we have to shake things up. Whatever journey you’re on, know that you will triumph. It’s the way of the universal story. And I’ll be here cheering you on.