When my son, Colin, was three years old he realized he was going to die. He wasn’t sick, and we had never talked about death. He just walked up to me one day and said, “When I die, some boy will get all my toys.” No drama, simply an acknowledgement. I, on the other hand, wanted to fall to my knees and weep at his loss of innocence. Instead I said, “You’re not going to die for a long, long time.” He looked at me as if I didn’t quite get it, and went back to his room. I went outside to hang the clothes on the line. A few minutes later he stuck his head out his bedroom window and said, “Now, mom?”

Our impermanence is like the white elephant in the middle of the room. We walk around it, over it, exclude it from conversations and banish it from the dinner table. What if we embraced it? Admittedly, a white elephant, or any elephant for that matter, is tough to get your arms around. But what if we at least acknowledged its presence? Or maybe warmed up to it gradually by spending time with its cousins, uncertainty and groundlessness? 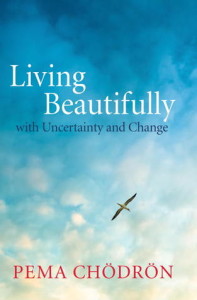 We might be happier. Saner. Less afraid. We might even find ourselves more fully alive, as counter-intuitive as this seems. In her latest book, Living Beautifully with Uncertainty and Change, Buddhist nun Pema Chodron challenges us to stop clinging to the shore, to abandon our patterns and habits and throw ourselves into the river of life without a buoyancy compensator. (I did this in real life once and almost drowned. But that’s another story.)

Perhaps the water analogy is what made this concept resonate with me. Pema begins her book with a quote from Shunryu Suzuki Roshi: “Life is like stepping into a boat that is about to sail out to sea and sink.”

I’ve been on that boat. The one that’s sailing out to sea and sinking. It was a lobster boat sailing from Seal Harbour to Machias Seal Island. Machias is a bird sanctuary managed by the Canadian Wildlife Service. It’s a 20-acre flat and treeless piece of rock stranded in the Gulf of Maine and it’s the breeding grounds for more than 3,000 pairs of puffins, among other species. A remote summer home to be sure, but that’s the way the birds like it. And to keep it that way the Wildlife Service limits the number visits to the island, licensing only a few operators to make scheduled landings.

Our charter left early one mid-August morning with ten of us – artists, photographers, bird-watchers, naturalists and hybrids, like me. We stashed our backpacks under benches in the back of the boat, jostling for seats in a vessel designed for work, not comfort. The Bay was grey and churning. As a recreational diver I knew how unpredictable the Fundy could be, and I had a framed map of shipwrecks around Grand Manan to remind me. I snuggled my two boys closer and settled in for our 20-km trip, and the rare chance to come face-to-face with some of the most fascinating birds on the planet.

Just as we lost sight of Southwest Head, the last point of land, the sea grew choppy. Throwing-up-over-the-side-of-the-boat choppy. White faces, white knuckles gripping the gunnels. Some of the children were crying. I couldn’t stop thinking, Why have I put my boys at risk? I grew up on the ocean. I know better. The boat rocked and shuddered. My children sat very still and quiet, eyes wide, wary, as if (was it my imagination?) they didn’t quite trust my judgment.

I couldn’t bear it. Finally, I took them by the hand to the front of the boat and knocked on the cabin door. The captain let us in. It was cramped. Colin and Patrick clung to me like barnacles. The captain looked grim (my imagination again?). We both stared straight ahead into the spray. I braced myself.

And then a funny thing happened. Once I stared the sea in the face, I started feeling my feet beneath me, solid even as the floor swayed. I became giddy, exhilarated as wave after giant wave broke over the bow. I wanted to shout, Is that all you’ve got? Crash! Let’s see another one. Bigger! More! Sitting in the stern had made it all seem terrible and hopeless. But up here I was fully alive!

That’s one of the things Pema is saying, I think. Whether you’re cowering in the stern or toughing it out on in the bow, you could still sink. But accepting your situation as it is sets you free.

The storm passed, as all things do. And after a few hours, a lighthouse emerged from the mist. We heard Machias before we saw it – a cacophony of screeching, shrieking birds. We climbed out of the lobster boat into a tender, putt-putting our way past seals stretched out on rocky chaise lounges. It was low tide, so the rowboat pulled up to the seaweed-slick ledges and let us out.

The children forgot their fear of the sea, preoccupied as they were with protecting themselves from being dive-bombed by Arctic terns. The enforcement officer had given us sticks to hold over our head. When the terns swooped down with their pointy bills, the sticks, being the highest point, took the hit. 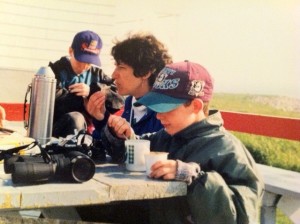 Lunch on Machias Seal Island with Colin (seated). Before he became an ultrarunner.

We spent three hours on the island, much of it in blinds, amazed by the array of wildlife and the chaos generated by thousands of birds on such a tiny piece of land.

In the last chapter of her book, Pema quotes the meditation master, Chogyam Trungpa who says, “Chaos should be regarded as extremely good news.” That’s easy to see on Machias Seal Island (once you get there!) but much harder to appreciate when we’re in the throes of it. Yet, facing life squarely and accepting it exactly as it is, without trying to hide from it (because, really, there is nowhere to hide) allows us to live fully in even the most difficult times.

As for my oldest son, Colin, the one who glimpsed his mortality at three? He now runs 80-km races through the wilderness, in the dark with only a headlamp, some food and water. Patrick takes on extreme physical challenges almost daily (think tire pulls and 30-minute wall sits). They’ve grown comfortable with discomfort. I believe Pema would agree with me that the boat trip to Machias Seal Island had something to do with it.

And me? I traded in my diving gear for a writing career, as unpredictable as the Bay of Fundy, which also requires letting go of the shore. And the deeper I go the more frightening and rewarding the journey becomes.

21 Responses to “Letting Go of the Shore”